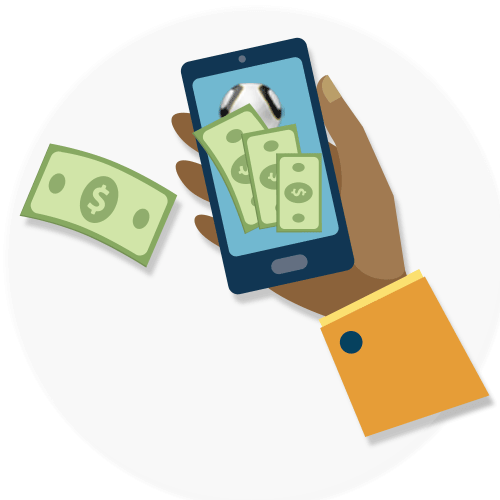 One of the most exciting ways to follow sports, and also to potentially making some money while doing so, is through daily fantasy sports sites/apps.

These products, also known as DFS, offer users the chance to pick teams and then manage them over the course of a set period of time.

Lately, fantasy sports have become something that is contested over a shorter course of time, rather than the old days where it took an entire season to do so. That means less time for you to have to manage a team.

In this space has now come Boom Fantasy, a service that cuts that time down even more.

Boom Fantasy is a great choice for those looking for a fun, manageable betting experience over a short period of time. It’s super user-friendly, sleek and intuitive.
It offers you plenty of choices to make over what you play and the chance to win prizes along the way. Plus, you can get deposit bonuses if you’re a new player!

Sign Up to Boom Fantasy & Get Your Free Deposit Bonus Money

Welcome to our Boom Fantasy Review!

Here you’ll find everything about this fantasy sports service including how it works, how to use it, what to consider before playing, what are customers saying about it, Boom Fantasy’s deposit bonuses and our verdict on Boom Fantasy!

What to Consider Before Playing Boom Fantasy?

The popular fantasy sites out there have gone out of their way to cut down on the amount of time it takes to manage a roster, no doubt, but there are still many issues with it.

You still need to have a wide array of knowledge about multiple teams on most occasions, which stops you from being able to play as well as you might have expected.

What Boom Fantasy does differently is that instead of having you pick teams and manage them, which can take hours, you simply make choices based on what will occur in the game. This makes it extremely simple, even for those that aren’t experts.

Furthermore, it can make one feel like they have a leg up if they know about the two teams that are playing, making it more possible for you to cherry pick your moments.

Of course, you have to consider whether or not you know these teams and players all that well.

It’s not encouraged to ever pick blindly while playing a fantasy game with money on the line, even if it’s done in an abbreviated manner such as this to make it easier for you over the long haul.

The person that SHOULD be looking into this is someone that is knowledgeable about a particular game or event that is being offered, and wants to be able to quickly maneuver and pick outcomes.

Which U.S. States Do Not Allow Daily Fantasy Sports Gambling?

Where can you play, Boom Fantasy? That’s a very crucial question.

Laws do change constantly, but — for now — the following states are not able to play.
Even so, you may want to double check just to be sure:

It does appear that the site has a fairly decent system to use locations to determine whether you can play or not, so once you allow the site to access your location you should know for sure. It should not let you proceed, if you are not in a state that allows it!

How Does Boom Fantasy Differ From its Competitors?

The biggest thing that Boom Fantasy has promised to have over some of its rivals is the ease of use.

This is where they are really at their best. Not only is the process quicker than on other products, but it’s also on a sleek, simple, and intuitive website as well.

«What is the difference between simple and intuitive?» — you ask.

We’ve all had products or websites that have been simple, yet they didn’t have a layout that made sense. This has both, clearly stating what you are looking for, in very common sense places.

All of this means that your user experience is streamlined to fit your needs, whatever they may be.

How Does Boom Fantasy Work?

How does Boom Fantasy work exactly, though?

It’s certainly different than normal gambling, that’s for sure. 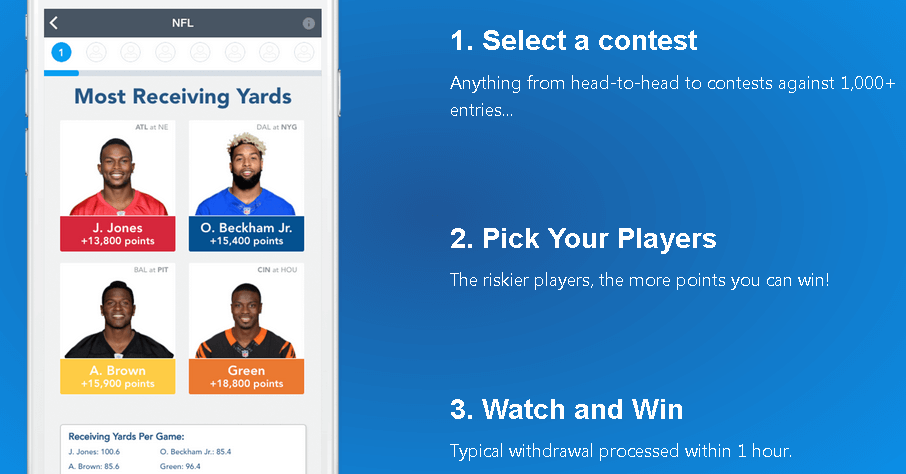 Instead of placing a wager on a specific player and winning or losing it from there, you have to compete against other players.

So when you are playing, what you have to do is go for points.

There are eight questions that are asked.

Prop bets are the most popular of which. In those, players are offered for you to pick, based on a number of bets.

The site lists a number of choices for you in groups of players. You pick from that group.

A marquee group could give you 500 points if they win the bet, but a group of lesser players could bring you 1,000 points.

It’s your choice to decide which group is the better bet, while also considering that the point value might make it worth you picking the less fancied players or groups.

Another way to earn points is to get predictions correct.

For example:
“How many shots will a certain team have?”

Your goal is to correctly pick that total.

The exact answer would give you a major bonus, while getting within one would also get you a considerable boost. Within two is a much smaller one, but you do get some points as a result of a fairly accurate pick.

One of the best things yet is that when a game begins play, you can track your results in live time as well, making it very desirable for fans to keep an eye on.

Which Sports Are Available on Boom Fantasy

Boom Fantasy’s contests focus around various sports.
Here is the list of the currently available sports you can wager on:

Soccer – soccer contests are available during special events like the World Cup or other major international soccer competitions.

In Which Platforms Is Boom Fantasy Available?

As mentioned before in our Boom Fantasy Review here, using their site is super easy to do, and they have made it even easier by giving you numerous choices.

You can use this service on your internet browser, on an Apple device (iPhone & iPad) and you can also get it on Google Play for your Android device (smartphone or tablet).

That gives you many options to use it and the best thing is that it’s still easy to use no matter which option you pick.

One thing that has to be pointed out, though, is that the Jackpot contests are not accessible on desktop/laptop computers.

How to Use Boom Fantasy?

The layout is very easy to use, with just three major options to pick from.

Lobby: The first option is the Lobby, where you will find contests to play in.

This Lobby is very easy to use, yet at the same time, they have not set it up in such a way that alienates you if you have played DFS before. This means you will feel familiar while still being able to find what you are looking for, if you are new to Boom Fantasy.

Another thing that you’ll be happy to know is that the Lobby allows you to pick a certain amount to wager on. You don’t have to go out of your comfort zone this way.

There are also a number of contest types to pick from:

My Contests: Once you enter a contest, you can find that under the My Contests tab. This is where you can track your progress.

It includes not only your current games, but also the ones that you have completed and the ones that are also upcoming, giving you the chance to look back in time if you like to see what you did right (or wrong).

Friend: You can also get benefits by clicking and going through the Friend tab. If you invite them, and they join, you can get a free jackpot entry by doing so.

How Easy Is It to Sign-Up Process on Boom Fantasy?

What about the nuts and bolts? How’s registering on the service?

You’ll find that to be quite easy. It takes just a matter of seconds to register. You simply pick a username and a password. Upon making sure the name isn’t taken, you are asked to verify your account.

This can be done quite quickly and then you are taken to an area of the site where you are asked to deposit money. It’s rather easy to do so, but you can skip this and save it for later if you choose.

Which Payment Methods Are Available at Boom Fantasy

If you do put money in, you can do so by using a number of methods. PayPal is accepted, as are major credit cards, like Visa, MasterCard, and Discover.

You can get bonuses for putting money in, and since those benefits change frequently you should take a look from time-to-time to see if you can find a good deal!

As I referred just now, you can get deposit bonuses on Boom Fantasy.

This deposit bonus is earned over time as you enter and complete paid contests.

This Boom Fantasy bonus code expires after 90 days and is limited up to $200.

What Are People Saying About Boom Fantasy?

Boom Fantasy has had numerous testimonials given to it over the last few years due to the experience it has given its users.

This is what the CLE SPORTS had to say on Twitter:
«For those of you fantasy lovers like me, y’all need to try out Boom Fantasy! This weekend was my first time trying it and I’ve won $400!»

A Reddit user by the name of R99 said:
«I found that it made the game interesting and gave me something to focus on for every play.»

And lastly, Dustin Gouker stated that:
Boom Fantasy is «definitely pushing the envelope in a good way» by going beyond what usually is done in daily fantasy sports providers.

What Are Some Alternatives to Boom Fantasy?

While Boom Fantasy is great, there are still other choices out there for you. The main ones are the big boys, DraftKings and Fanduel.

What is the difference between that pair and this one?

Well, those two are made for people that are more intense and into the respective sport a little more; while it does take more time and patience, very serious players can make more money via that route.

They each also offer a much wider array of sports and events. This may not interest you, but it’s possible to bet on things like eSports on those products. There are also many, many more contests available due to the sheer size and scope of them.

That’s part of their appeal, and there is no denying that.

To conclude our Boom Fantasy Review, and as our verdict, here are our final thoughts about this daily fantasy sports provider.

If you are looking for a fun, manageable experience over a short period of time, though, Boom Fantasy is the right thing for you.

Like it promises to be, it is easy to use, sleek and intuitive, and it gives you the choices to make over what you play.

It makes sure to cut your time mulling over decisions down drastically compared to other games, and it offers you the chance to win prizes while doing it all!

So, if you found it interesting, why not giving it a shot?

Sign Up to Boom Fantasy & Get Your Free Deposit Bonus Money